A lot of teen drinking is harmful and ILLEGAL.
But in certain cultures it isn’t a problem. Why the difference?

His head was pounding and his clothes were stained with vomit and spilled liquor. 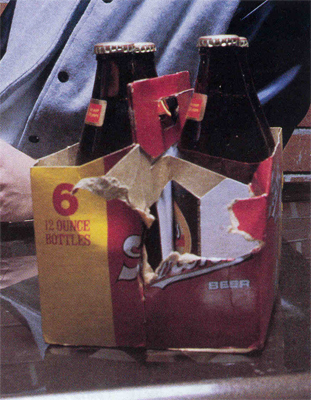 The graduation party had been over for a while, but he was in no shape to go home.

As his friend helped him clean up, the room seemed to keep spinning. He couldn’t remember much of the party itself, but he kept mumbling, “We had some fun, didn’t we!”

But after cleaning him up, all his disgusted friend could say was, “Where did you ever learn to drink like that?”

Where do we learn our drinking habits? Why do some people have severe abuse problems, while others seem to have no problem at all?

For example, teens in several Mediterranean cultures commonly drink alcoholic beverages, but for them, drunkenness and alcoholism are relatively rare.

There is important evidence that alcoholism develops
two to five times faster in young people than in adults.

Yet in other areas, alcohol and abuse seem to go hand in hand. In one survey, nearly a third of U.S. high school students who drank were classified as “alcohol misusers” or “problem drinkers.”

These teens reported that they had been drunk at least six times in the previous year or had serious difficulties two or more times that year because of drinking.

Where do users and abusers learn to drink in such different ways?

Before answering that question, let’s quickly look at why the answer is so important.

Perhaps you’ve already witnessed some of the serious problems created in the lives of young alcohol abusers. They tend to have school and grade problems. They’re often destructive. Abuse of alcohol is the leading factor in fatal and nonfatal traffic accidents involving teenagers. It also crops up in many teen suicides.

One expert on teenagers and alcohol points out that being tipsy or drunk makes a young (or old) person overconfident and so puts him or her at high risk for a serious sports injury while swimming, hunting, skiing or even just playing a ball game with some friends.

“Every time you get drunk, your brain is temporarily damaged (just like it is when you get an anesthetic); and . . . this impaired mental state often leads to embarrassing, costly or potentially fatal situations.” So says Dr. Joseph A. Pursch, a noted authority on alcoholism.

For teens, the question of alcohol abuse can be especially vital. There is important evidence to show that alcoholism develops two to five times faster in young people than it does in adults.

Said one alcohol expert: “When adolescents begin drinking, it is not uncommon for them to move from experimental drinking… to alcoholic drinking within two to three years as compared with 10 to 15 years common for an adult.”

And the impaired judgment of being drunk exposes teens more easily to those who want to take advantage of them. The results include pregnancy, venereal disease, fights and other socially embarrassing behavior, all of which can damage young people’s reputations and future careers.

Specialists in teenage alcohol abuse also point out a less obvious reason abuse is so damaging to young people. Excessive alcohol dramatically interferes with developing an identity, sense of selfworth and coping skills. It dulls and alters reality, retarding the maturing process and causing alcohol abusers to withdraw within themselves.

It’s up to you to prevent an alcohol problem or, if you already face one, to seek help to conquer it.

Where drunkenness is rare

Consider the Mediterranean cultures mentioned earlier where drunkenness and alcoholism are rare. Included is the Orthodox Jewish culture in many nations. Why haven’t high levels of abuse problems developed in these cultures?

It’s because parents teach the accepted uses of low-proof alcoholic beverages that are generally taken with meals in the presence of other family members. And in these cultures there are strong social sanctions against drunkenness and drinking at unspecified times.

Even outside these cultures, the reason most young people who drink moderately do so is that their parents do, and they respect their parents. Also important are high moral or religious values and good examples from close friends.

The picture is quite different for teenagers who drink heavily. For many abusers, parents have set a bad example by reaching for a drink every time they have an emotional problem or difficulty.

These teens have learned by their parents’ examples that alcohol is a means of blotting out some terrible aspect of their lives, perhaps a poor family life, some kind of physical or emotional problem or a poor self-image.

To many, both adults and teens, drinking and “holding your liquor” are associated with masculinity or being part of the right group. Many young people receive their alcohol education from being pressured by “friends” at a beer bash where they’re expected to get drunk to have fun.

Because of such damaging pressures, many adults and teenage alcohol abusers have trouble accepting the truth about their damaging habits. Without proper family use and teaching, there’s little chance a young person will learn proper use of alcohol.

Several years ago, Dr. Morris E. Chafetz, former director of the U.S. National Institute on Alcohol Abuse and Alcoholism, explained it this way: “Under ideal circumstances, children should learn healthy attitudes about drink in the familiar surroundings of their homes.

“However,” he went on, “too many parents are too confused and too guilty about their own drinking to teach a youngster to drink moderately.”

Even if you don’t have such a good example in your life, don’t give up. You don’t have to abuse alcohol just because others do. As a slogan says, “It’s OK not to drink.” Many teens are proving they can have fun without alcohol.

It’s up to you to prevent an alcohol problem or, if you already face one, to seek help to conquer it.

Experts often advise that some people who are at high risk for alcoholism, especially those with frequent alcoholism in their family, should not drink. And religious beliefs and the law can also dictate that teens should not drink.

If you want to avoid the abuse of alcohol, seek advice from a relative or someone else who doesn’t overdrink. Look for someone who is a good example of self-discipline in his or her life.

If alcohol already is a problem, ask your health department or local hospital for professional assistance to overcome it.

Proper use of alcohol has to start somewhere. How about it starting with you?

Too Young to Die

It was 4:30 a.m. when I received the call from my sergeant. I can still hear his deep and worried voice, advising me of a major accident where my assistance was needed.

It was my first call involving a car accident, and I was scared, but I tried to hide it.

Arriving on the scene, we could see a car folded like an accordion. Parts were scattered all over the road.

The ambulance had not yet arrived. My heart was beating fast and strong as we rushed toward the car. There was only one person in it – a 17-year-old I’d known well. I always thought of him as a good kid.

Now his head was tilted back and his eyes were wide open, staring toward the sky, as if asking for a second chance. Pieces of the windshield were embedded in his forehead. He had been bleeding like a fountain – it was a gory scene. I felt like I was going to be ill.

I don’t think he was conscious after the accident, but from probably 2:30 a.m. until shortly before we arrived he had held on to life, even unconsciously.

It seems that night he had gone to a social organized by the town. With the help of friends he had gotten some alcoholic beverages. We learned from the autopsy that he had double the amount of alcohol that the law defined as intoxication.

We had to get assistance to get him out of the car because he was wedged in by the twisted metal. Part of the car had to be .pried free before he was able to be removed.

That accident wasn’t the worst one I witnessed as a policeman – actually it was just a typical one. Of course, not all accident victims die. Some are crippled, paralyzed from the waist down. They will be remembering it over and over again – trying to understand what insanity caused their tragic moment.

Still, I won’t forget that first accident I was called to. It burned into my mind the truth of the statement: Drinking and driving don’t mix.

In accordance with Sec 107 of Chapter 1 of Title 17 of US Copyright Law, this material is distributed without
charge or other commercial interest for the purposes of comment, teaching, scholarship and review.